Play your media files without any codecs

GOM Player is a free media player that gained its popularity because it’s capable of playing almost any type of media file and the comprehensive built-in codec library.

GOM Player enables playback even for locked and partially downloaded or damaged files( by skipping the damaged or missing frames) and handles all the popular file formats such as AVI, DAT, MPEG, DivX, XviD, WMV and ASF.

- GOM Media Player contains all the popular video codecs such as XviD, DivX, FLV1, OGG, MP4, H263. If a video requires additional codecs the program will automatically find it and guide you towards a viable download source.
- GOM Media Player is using advanced technologies that allow it to play even damaged or incomplete AVI files.
- Multiple subtitle formats are supported such as SMI, SRT, RT and SUB (with IDX) and various options are available to customize them such as margin, location, size, resolution, font and others.
- Playlists can easily be created and edited within GOM Player and because the playlist format used by the program is similar to M3U, PLS and ASX, playlists that come in either of those formats can be opened and edited.
- The Screen Capture function enables you to capture images of your video and the Burst Capture feature allows you to take up to 999 continuous screenshots.
- The advanced settings allow you to fine-tune the way your videos are displayed, for example you can define levels for brightness, contrast and saturation, sharpen and add noise, adjust audio output through the audio equalizer, repeat a section of a video using the A-B Repeat feature, create multiple keyboard shortcuts and more.

Download and listen to your favourite music using this handy and efficient commercial music streaming service.
21 / 4,765

A great medi player that supports a ton of video formats, and offers a lot of features for advanced users and beginners alike
15 / 2,001 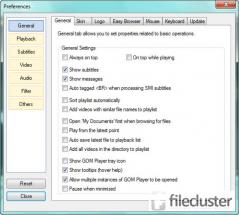