A friendly and functional application that can run benchmarking tests on HDD, SSD, USB sticks and SD cards

IsMyHdOK is a small utility designed to submit a variety of storage devices such as HDDs, SSDs, USB sticks and SD cards to benchmarking tests and estimate their read and write speeds.

Since the application is portable, there is no setup involved and you can store and run the executable on practically any storage device, including portable ones.

IsMyHdOK enables you to select the volume that should be tested from the related menu. There are also four test durations you can choose from. The Short Test which lasts fifteen seconds, the Quick Test that takes about half a minute, the Long Test which completes in 60 seconds and the Very Long Test that can take up to four minutes to finish.

During the tests, data will be read and written continuously in 4 or 512 kb blocks of data, as well as running in parallel 64 blocks of 4 kb.

A robust benchmark tool that lets you test PC performance in multiple areas
53 / 6,505

Benchmark and overclock your system components with ease
12 / 4,777

Observe the current GPU stats and get useful info if you want to OC your GPU
8 / 2,602 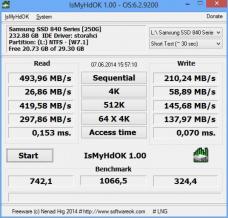