Trackpad++ is the first of its kind driver and it is the sole alternative for using Apple’s Multitouch Trackpad with Microsoft Windows installed on your MacBook Pro or MacBook Air devices.

This driver enables the use of track pad in Windows if you decide to switch to Microsoft’s operating system on your MacBook notebook.

What are some of the features and benefits of the Trackpad++ driver?

It greatly expands multi touch functionality and allows for two, three and four finger gestures including tab, back or forward, zoom in and out, show and hide windows and even the newly implemented Windows 10 gestures.

Two finger scrolling capability has been significantly optimized and it resembles the Mac OS scrolling model which allows for accelerated or natural touch options.

So called pointer ballistics are enhanced as well. Trackpad++ allows for two finger dragging without any bugs or errors and provides the possibility to increase the pointer speed while dragging.

Users can fine-tune options for ignoring any accidental trackpad input during typing sessions and removing accidental drag & drop actions (when you’re dragging tap-style). It also comes with a built-in Control Module, where you can conveniently adjust all of the program’s settings.

Trackpad++ has complete native support for all latest versions of Windows including 64-bit Windows 7, Windows 8 and Windows 10.

Collect and manage a large number of images received from orbiting meteorological satellites
4 / 3,765

A small command-line utility that allows you to run useful tasks in a fast and simple manner, without displaying any user interface
4 / 919 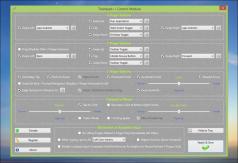 Mem Reduct 3.3.5 Keep track of your computer’s memory status in real time with this handy and convenient tool
Latest Articles
How to Download Videos from Twitter
How to Reduce Steam’s RAM Usage from 400 to 60 MB
How to Watch Netflix Videos Offline
How to Blur Pictures Using PowerPoint
How to Optimize Windows 10 For Gaming
5 Useful Search Engines for Social Networks
How to Get a Cheap (or Free) Windows 10 License
Top 5 Best DNS Servers for 2020