VLC Media Player was designed as a cross platform media player and can also be used as a server to stream live and on demand video over networks and internet in multiple formats.

VLC is a highly portable media player and contains a large number of encoding and decoding libraries, so you won’t need to install and update codec packs because VLC Media Player already has them and can play anything by itself.

VLC Media Player is a great choice to play your multimedia files offering continuous updates and codec support and a minimalistic friendly interface, all of it free of charge.

Easily manage all your multimedia content with this feature-rich media center tool
3 / 1,002

Create multiple playlists and listen to all of your favourite songs with this straightforward and easy to navigate music player
10 / 1,786

An audio player that enables you to enjoy listening to music, while offering quick access to the files and folder stored in your computer
295 / 2,160 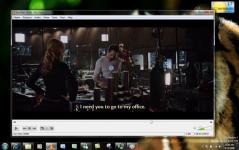 GOM Player 2.3.49 Build 5311 Play your media files without any codecs
Latest Articles
Best Android Emulators for PC and Mac (2020 Edition)
How to block people from adding you to WhatsApp Groups on iPhone and Android
How to improve the battery life on your iPhone 11 or X series
How to install and use the TikTok app in Windows 10 or Mac OS
Best email apps for iPhone users in 2020
Best free PDF editors for Windows and Mac